So, race day. Firstly, having to wake up at 5am for a race is no fun, waking up in a Cars themed hotel room and having somebody interrupt your race-day prep to take pictures even less so, especially when you know the photographer is going back to sleep for another few hours, hence the grumpy/asleep face 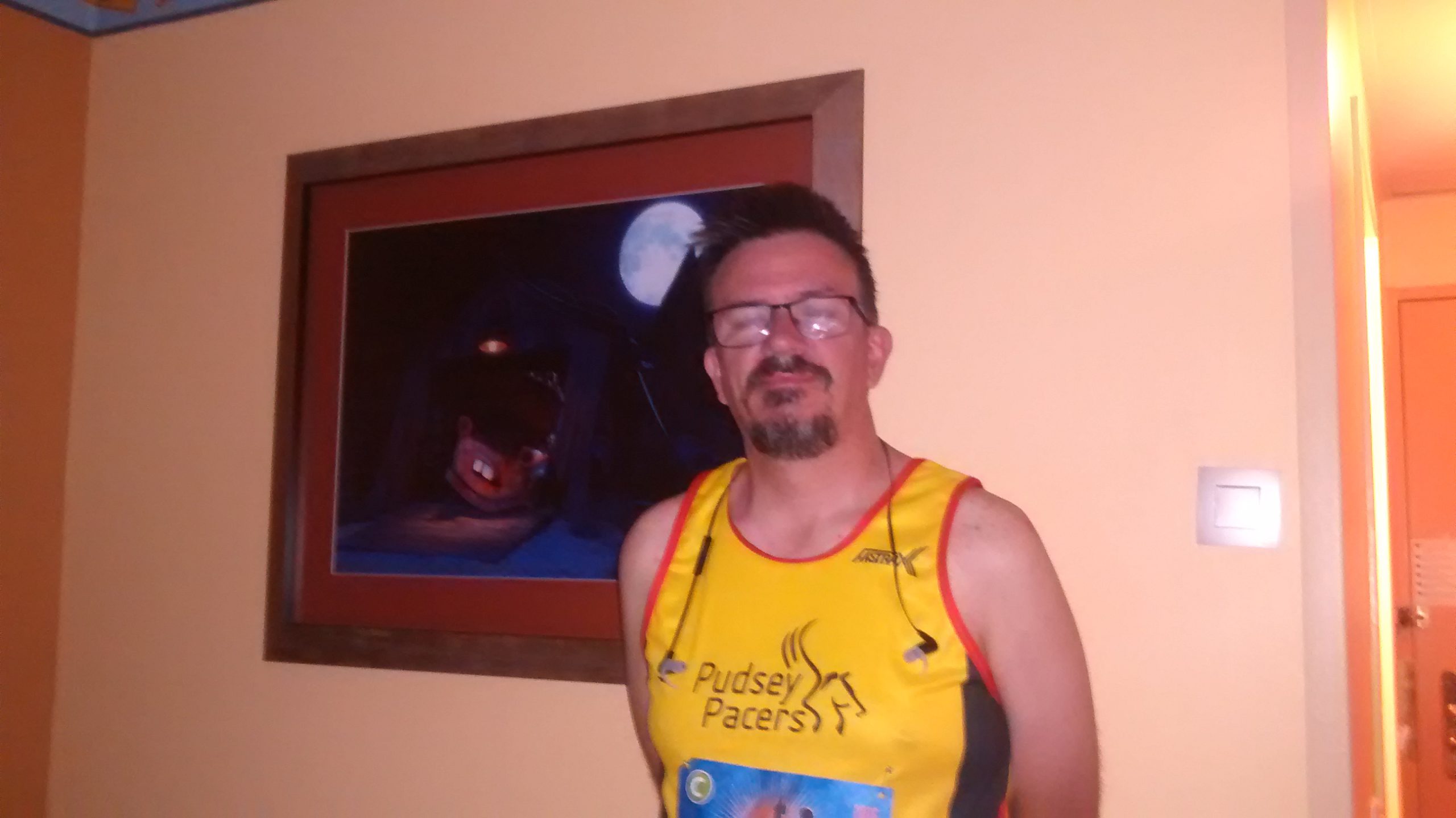 This picture illustrates where mine and Dom’s attitude to the race had differed, he’d raised a load of money for charity, and was going to have a great time. I was now a club runner who was going to set a good time (or at least hoped to), so shorts and vest at 5am it was.

I say Dom was going to have a good time, he looked about as happy as I did about being awake at 5am, only he’d realised he was now going to spend the morning in a Tigger Onesie

About half five I left the hotel room, and started scoffing down bananas, cakes and whatever else why lying around the hotel room (the hotels were all full of runners, but Disney didn’t think doing a pre-race breakfast shift in the restaurant would have been a good idea) as I walked the mile or so to the start I was joined by more and more runners 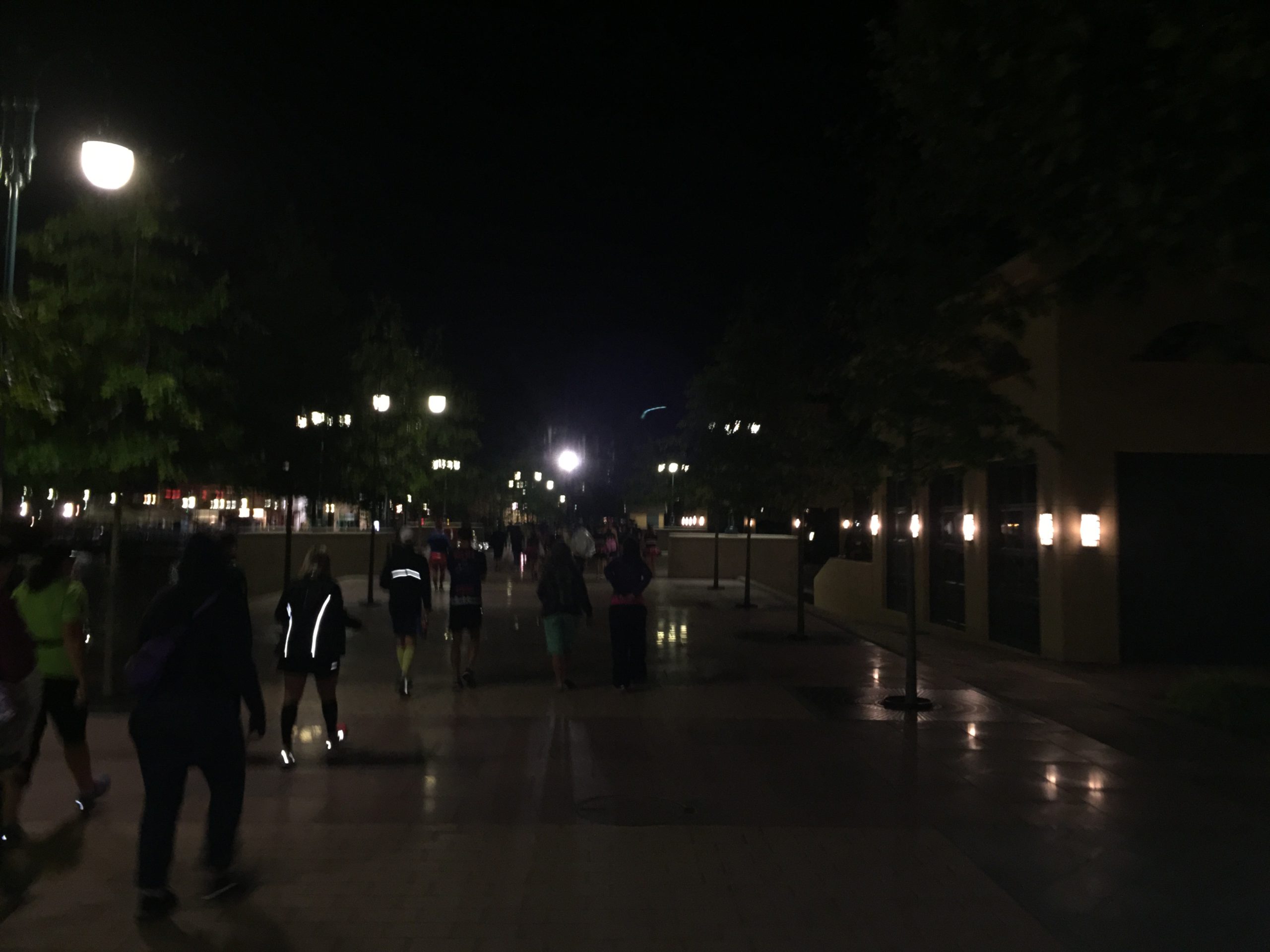 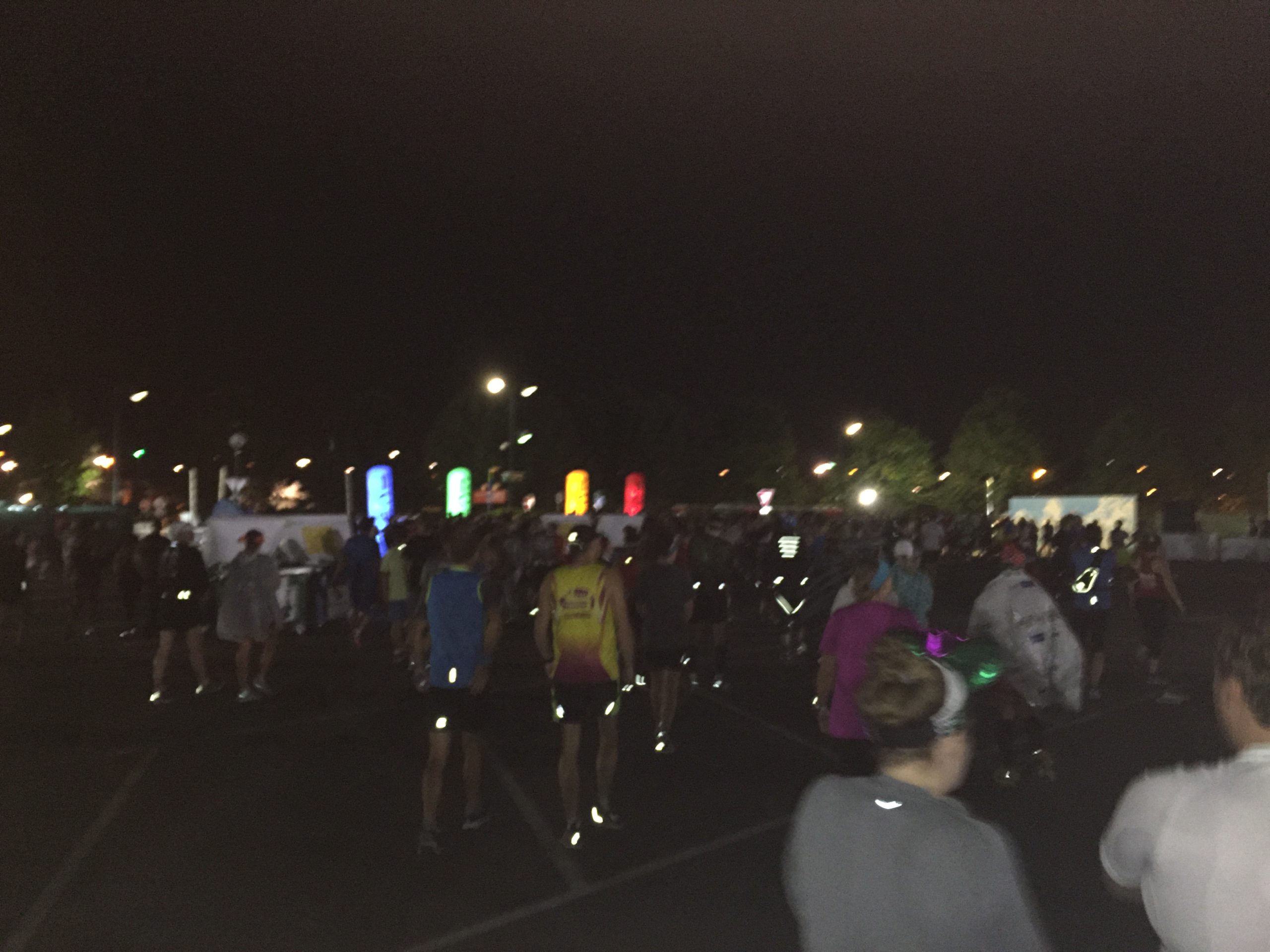 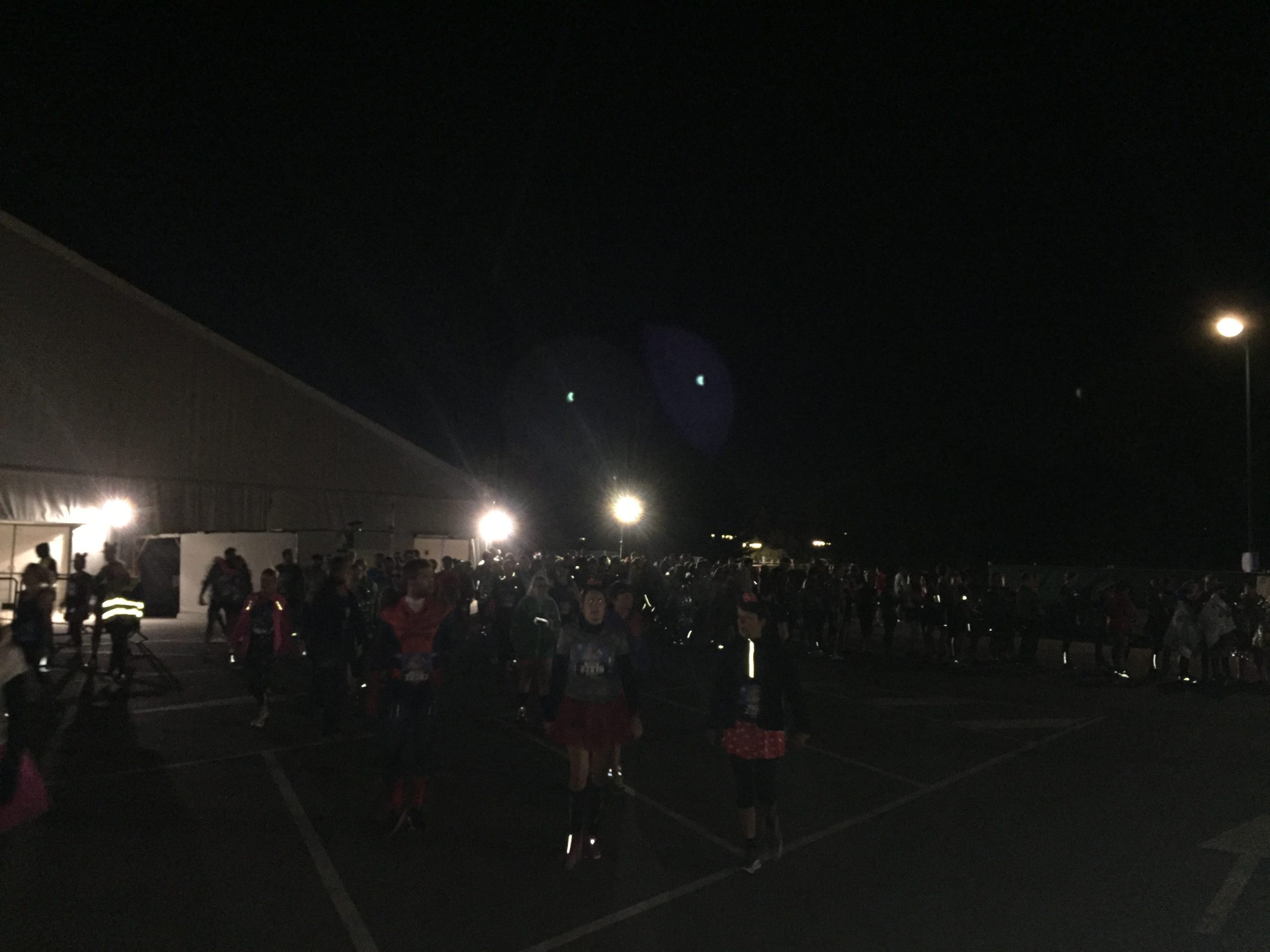 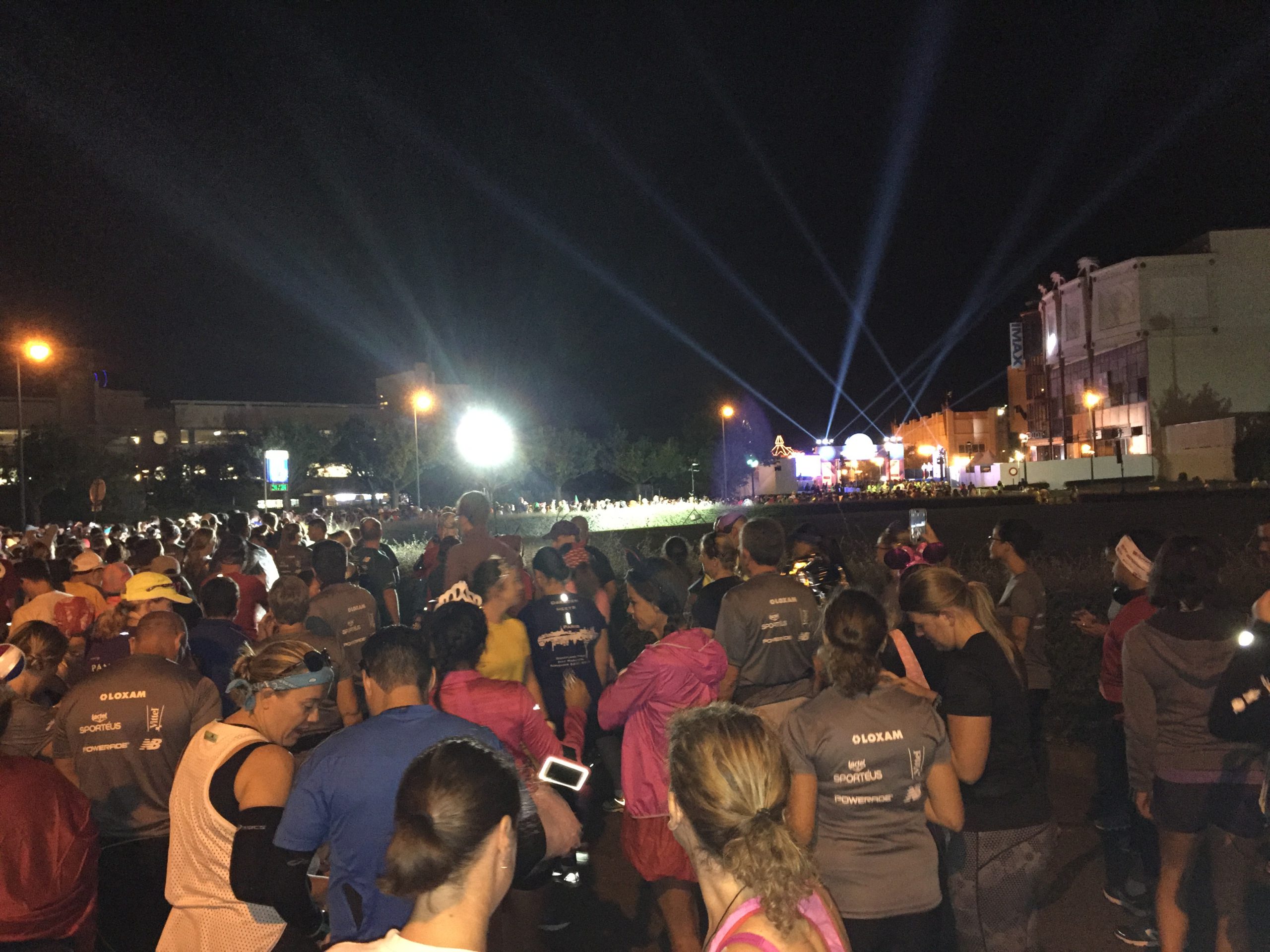 Even though the planned start was over an hour and a half away, I could barely see the start line, so I slowly and gently worked my way forward. 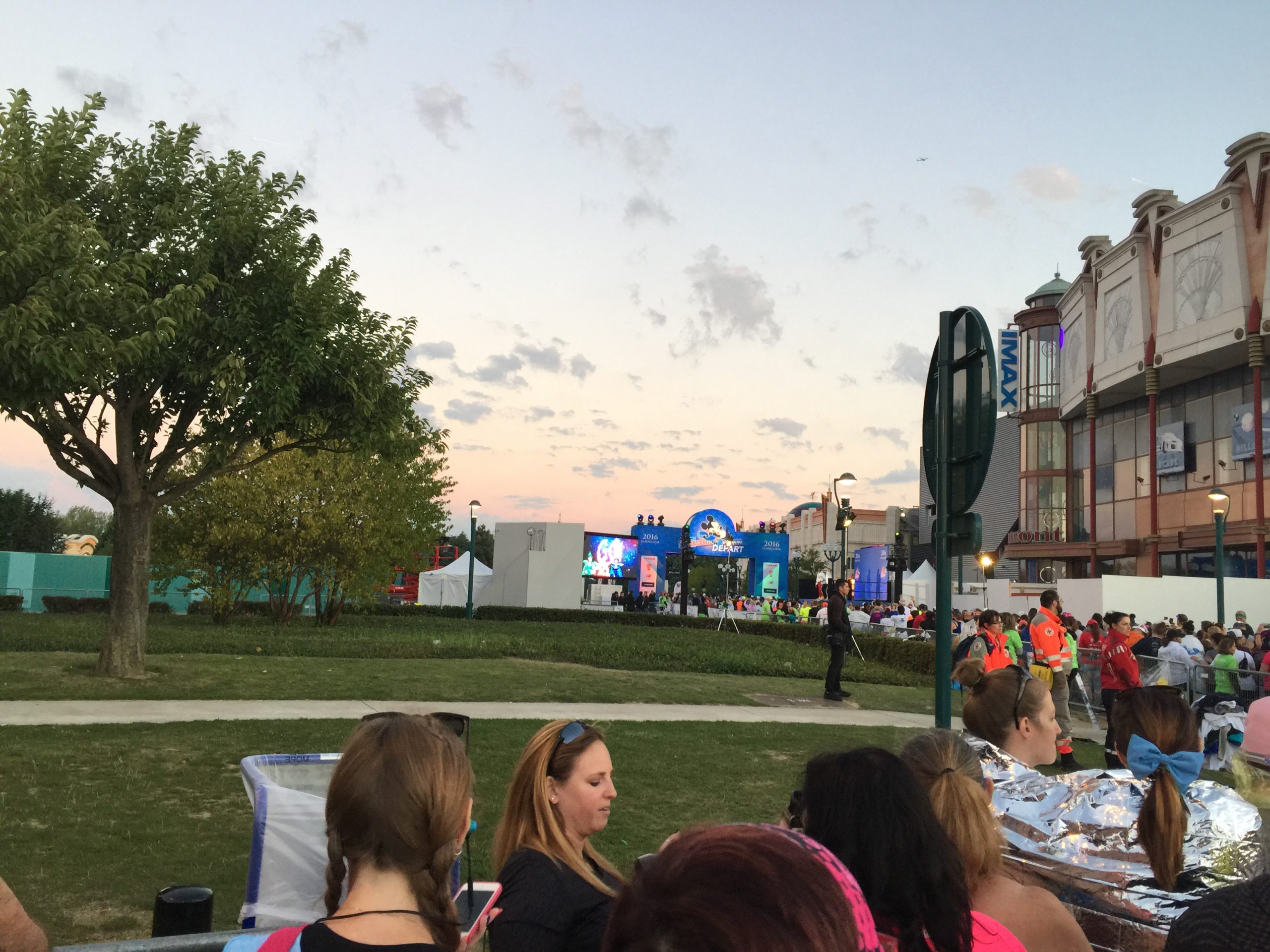 As you can see, it was light by then!

The start(s) were also a little bizarre, they were breaking people off into groups or 20 or 30 and doing little countdowns to have a race-start with each group. I’m sure there was a practical reason for it, but just added to my annoyance as I was beginning to realise there was a real chance people would finish before I set off. 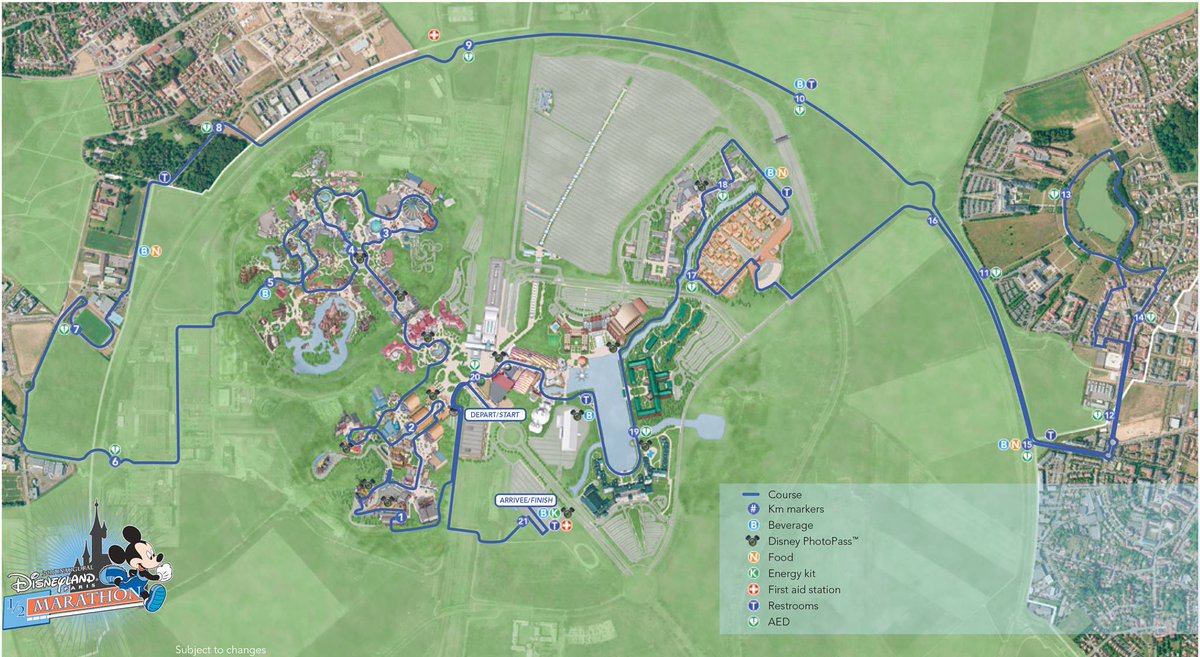 Now, like any sane person, my photos stop between start line and finish line. But this is Disney, this is not home of the sane. The first couple of miles wound through the park (before it was open) which was actually very very cool, but at every few hundred meters they had Disney characters you could have your pictures taken with and people where doing … and they were queuing for the privilege! It wasn’t just the characters, every km had a different Disney themed banner and people were queuing to take selfies with them too! I guess it’s a Disney thing, but I just didn’t see the point of adding 5 minutes to your finish time  just to get a pic of me stood next teenager is a giant Donald Duck costume.

It was pretty cool though. Every Disney ride, shop and attraction had it’s staff out front cheering people on and they were making a real effort,  thought I won’t pass comment on the fact that one of the biggest queues for pictures was actually as we were leaving the park through a maintenance exit and Disney’s own fire crew were there to cheer everyone one! What is it about firemen?

It was round about that point that I’d realised they’d screwed the start up more than I expected, as I’d been passing hundreds of runners, many already having to walk, then (not for the last time that day) I hear “alreet Glenn” from a giant West Yorkshire Tigger. Hang on I thought, even at the 3hr ETA I put on my form (that I was now expecting to smash), I should have been a long way ahead of Dom who was genuinely worried about the 16 min mile sweep vehicle (he didn’t  need to be as it happened). Had they really let blocks D and E go ahead of block C, it certainly seemed so!

Still, I was running against my own watch and setting off with a bunch of people running way slower than me (rather than faster, like normal) was probably exactly the start I needed.

As we left the environs of Disney itself, we headed off into some very typical and rather pretty French countryside. A hand full of marshalls and locals were scattered along the route, but I was generally enjoying the scenery (which was nice, even if it was a dual carriageway Disney bypass road). As with many races there were the odd jobbing bands at various points, but special note goes out to the two didgeridoo players accompanied by a human beatboxer, I lost a good couple of miles contemplating that one.

Whilst the main section of the course was a big loop leaving one side of the Disney site and re-entering the other, there were quite sizable sections that looped back on themselves, allowing you to see the runners coming the other way, several miles ahead/behind of you and whilst a staggeringly high number of runners were in fancy dress, I did spot a few traditional UK club running vests, in amongst the myriad of Minnie Mouses and Marvel Characters. I also saw Dom again, who was moving well, albeit a few miles behind me.

The drink stations were plentiful, well stocked, with little bags of surprisingly succulent slices of apple being a pleasant addition to the power bars and isotonic drinks.

About 9.5 miles saw us re-entering Disney environs again, by looping around almost all of the resort hotels, where I was given a bit of a lift by my wife and son taking advantage of the meandering route by popping up to cheer me along a three different points within about a mile and a half. 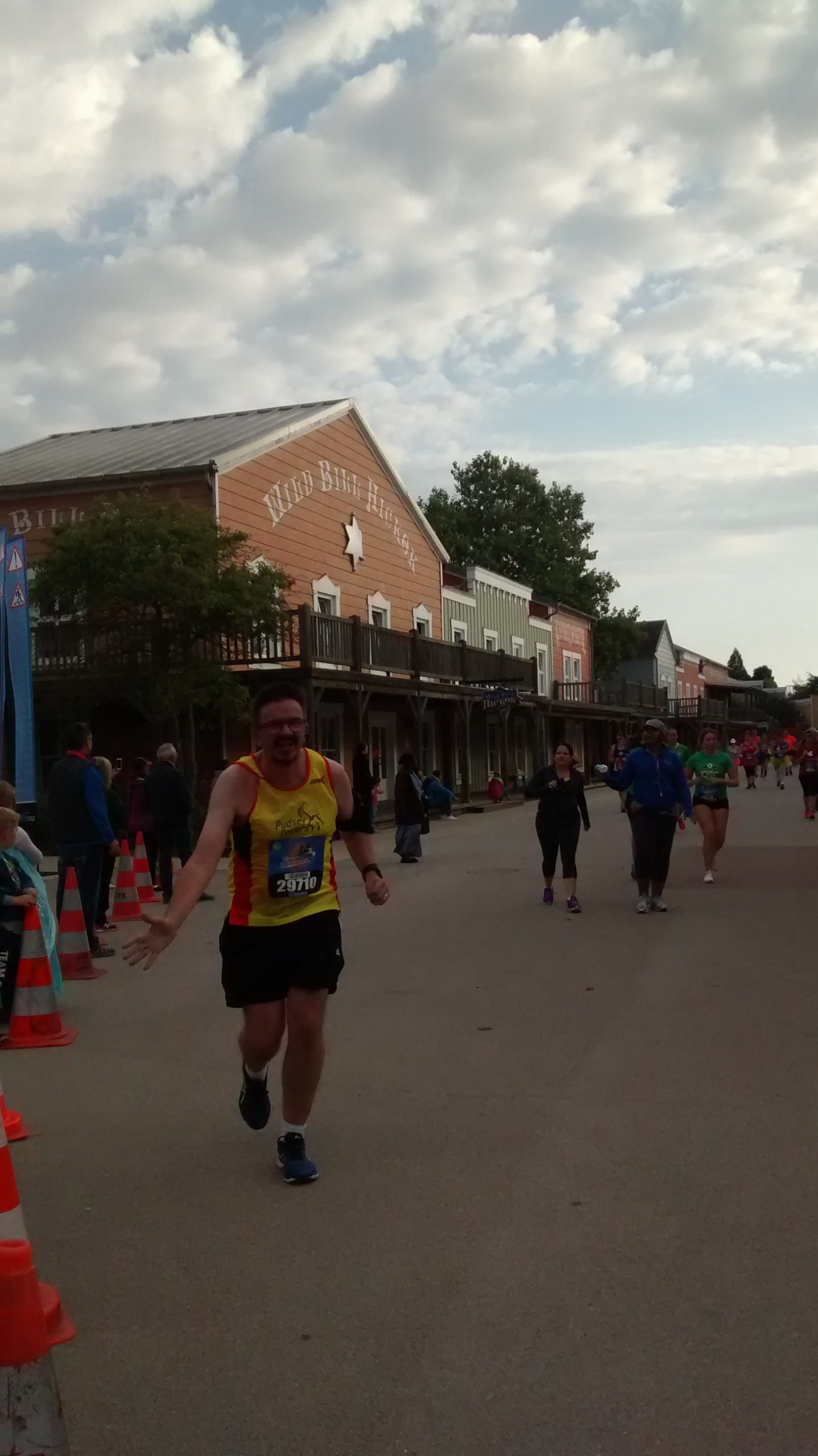 Sadly you don’t re-enter the actual main parks on your return (I understand the logistics of this make it impractical), so after a trip down the main Disney shopping Boulevard, it’s a sharp left back into the far less magical Expo Centre Parking Lot to the finish line, which was off limits to non runners. Again I understand the logistics, but after such amazing support on the way around, having virtually none for the last half mile felt odd.

Still, it didn’t matter to me, I’d done it! I’d got around! I wasn’t in an ambulance or a sweep car, I’d got around under my own steam. Then I looked at my watch, 2:12, MUCH quicker than I expected! 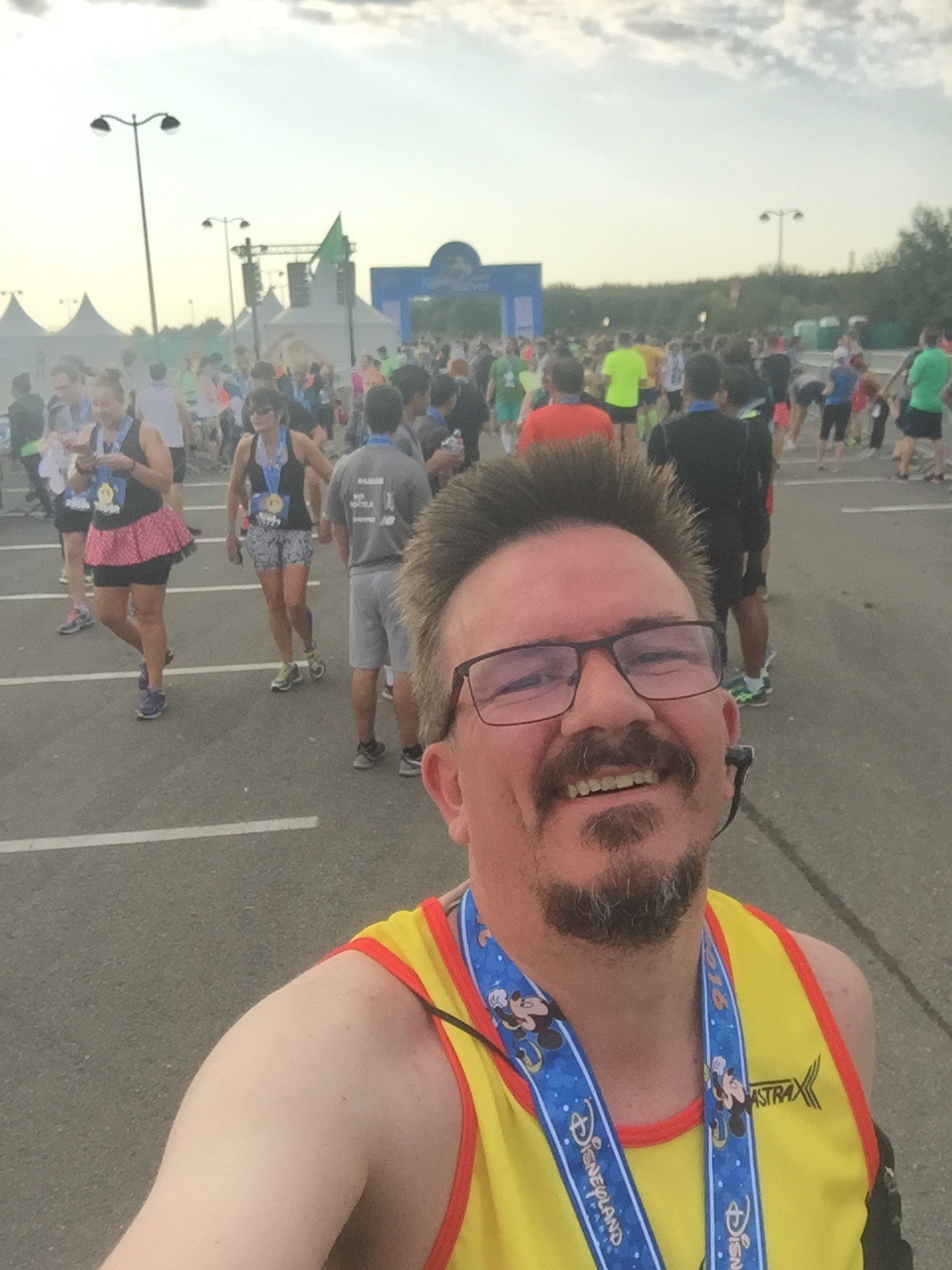 There were 2 stings in the tail though, the first was in an attempt to make Disney more special that a normal half, they medal they dropped around you neck was more akin to a ships anchor! Trust me, after 12 miles, you felt every ounce. 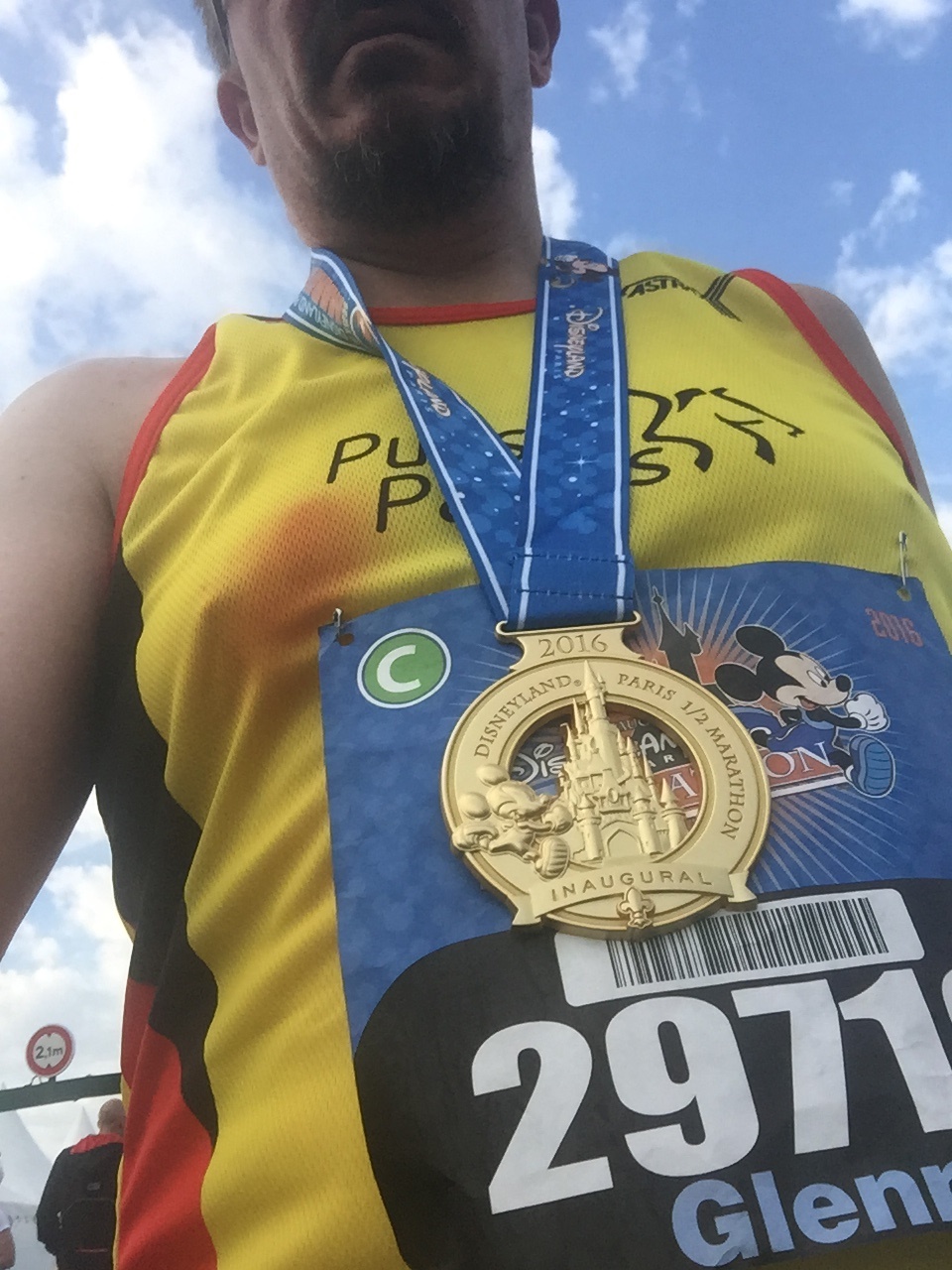 Now the second sting, the more observant of you may have spotted, I certainly hadn’t at this stage

It was only after the adrenaline had worn off and I was back in my hotel room, about to jump into the bath ….. I’d forgotten the Vaseline and now both me and my new Pudsey Pacers vest were a bit of a bloody mess. 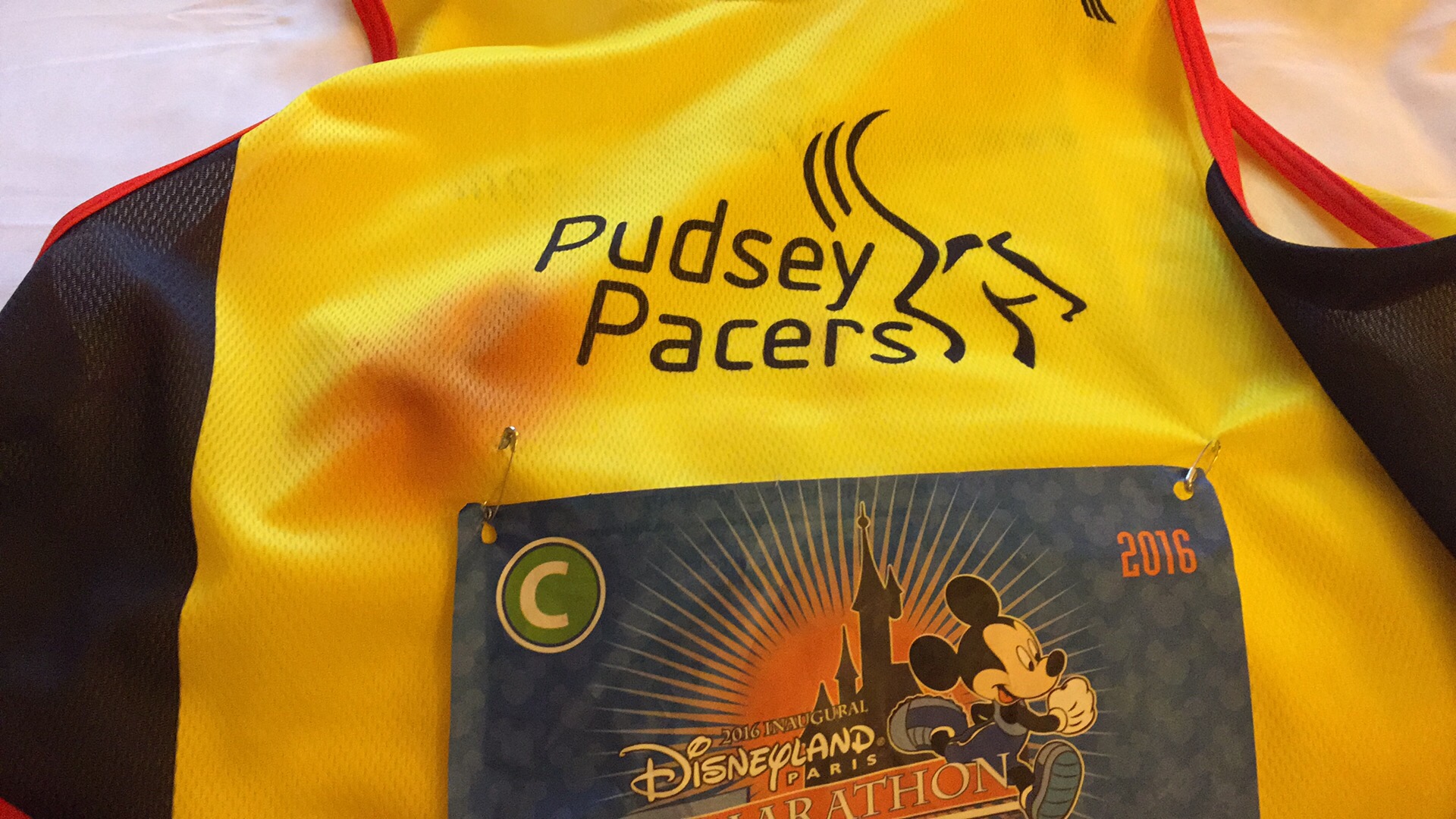 So, in summary, it was special to me because mentally after that I consider myself a runner again, rather than a fat lad doing some jogging and the magic of Disney does as a certain something to events, but I can’t see it being one for seasoned runners who aren’t partial to the World of Disney.